This game carries it's weight in gold. It's one of the greatest shootes I've played in recent years, which I find to be somewhat comical as I've played a fair amount of games, but none that made me say "Wow, this game has a pure vision and excells at presenting itself appropriately."

The fluid movements, the INCREDIBLY TIGHT gun play, and even the enemies are all incredibly well designed around a world that was seemingly flat and lifeless. The modern upgrades to the game which adjust FPS, screen resolution, and even adding a tad more color to the world via illumination make this game really scream in the year of 2020. If that's not enough for you, don't worry mod support for this game is still alive in the current year, and it's pretty easy to see why once you've got one full playthrough in your system.

However while the color palletes are dull, they all contain a certain uniqueness I've seen in other games and they certainly capture the otherworldly feeling their going for! From the towers to the stained glass I feel this game properly demonstrates a hellish feeling in the atmosphere. The water an off blue/green gives it a nice stagnant look. The lava placed sparringly except for a few levels. The overhead lighting fixtures that look aged and decrepit. The miasma in the sky looking like a low hanging poison over a dead world, it just has the environment that's incredibly cohesive. Even in the couple of levels where you're fighting humans as opposed to demons. There was never an instant in this game where I though to myself that this world didn't belong to each of the previous levels. 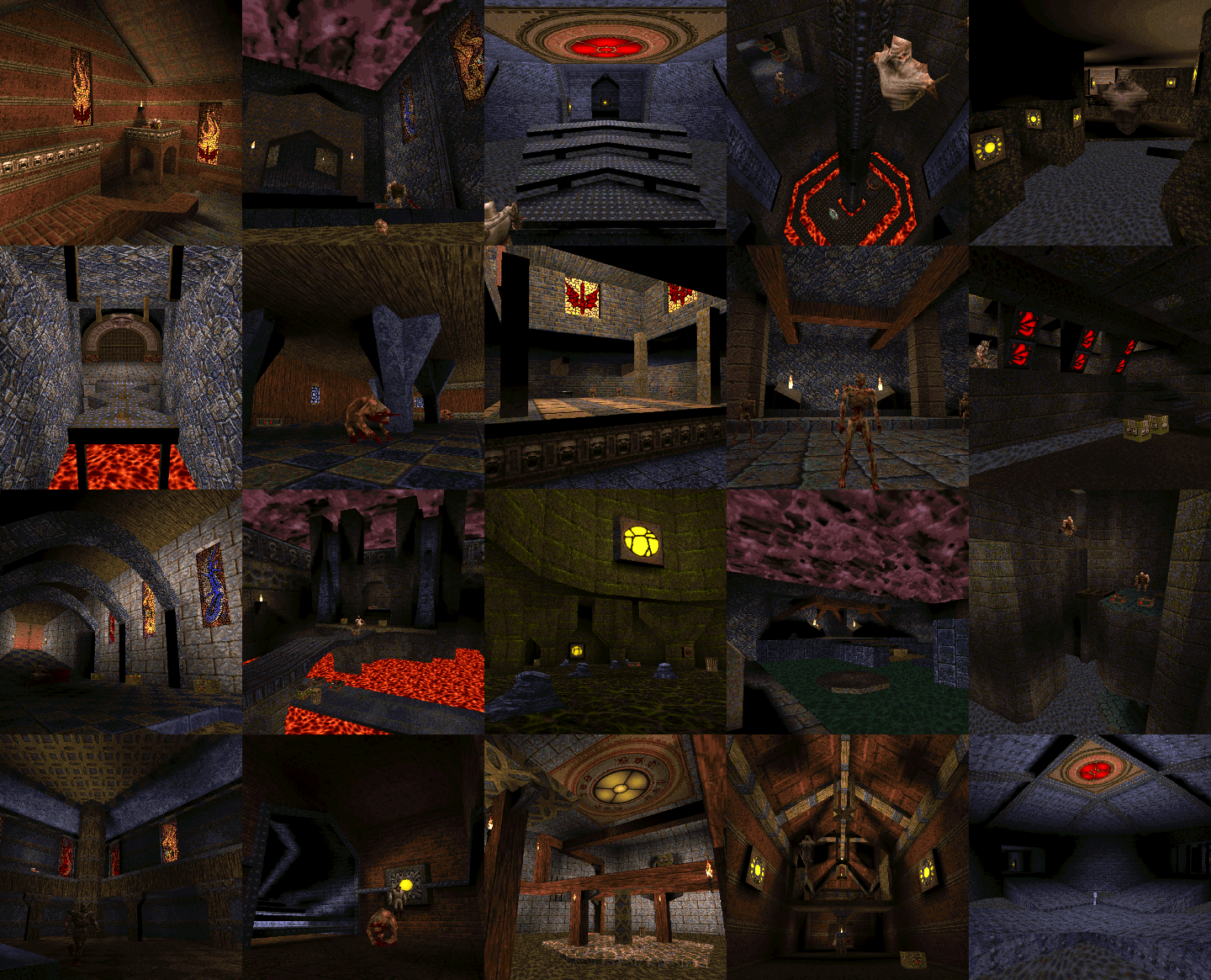 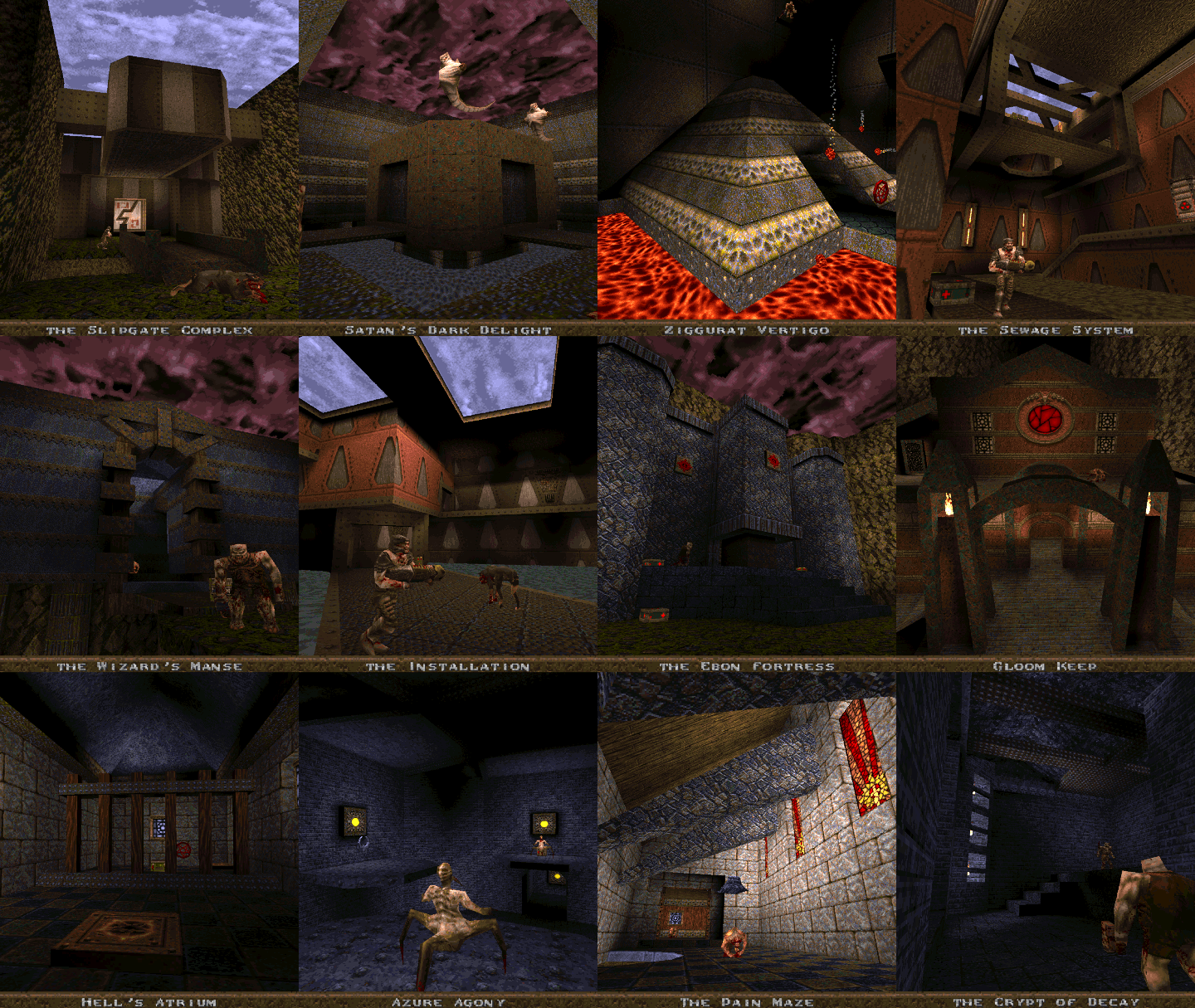 Quakes dull and uninspired gothic look combined with the fantasy setting it's in plays to its strength in a 1990's world where D&D was just taking it's first roots. It's easy to see how they created what they've made.

The games difficulty is rather comical, instead of doing what modern games do and just making enemies bullet sponges, it takes the approach of just adding more bodies. No longer is there 1 person in the starting area, there's 3 along with a hidden individual that pops out once you walk past a wall. The way of adding more enemies with the same health pool is an incredible ballancing tool. It makes your shots still feel impactful, yet the difficulty has genuine gone up. More guns shooting at you, more accurate shots you'll need to send their way, but each shot just as impactful regardless if you play on easy or the hardest difficulty.

For a game about shooting, it's got a feeling

Surprise surprise the guns in this game also look incredibly uninspired, but don't let that fool you. Each of them have their purpose and as you hot swap to them in the midst of combat, you can't help but feel like there's a magic in how you know what tool you need to solve the problems that have arose. Ammo is also a heavily coveted resource in this game, and once you're out you're out until you you find the next items that may have dropped, but these aren't incredibly common. Expect to run out of some ammo on each map and find yourself improvising with which weapon you're using at that moment.

Standard axe, non-beefy damage. Takes a few swings to take down most enemies, you'll be using this if you're out of everything else, which can happen! 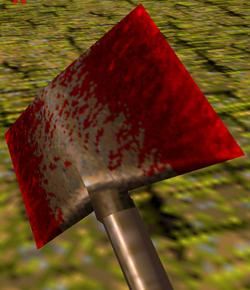 It's just a better nail gun, it shoots faster and does more damage. Use this instead of the regular nail gun in most instances. A fun blaster that just entertains. I honestly spent most of my time using this gun when I didn't have the double barreled.

This was my standard pull out in most instances, it carries a decently sized amount of ammo on you at xx which seems low, but since most things die in one or two shots with this it's a pretty convenient weapon. Tight corridors are perfectly mixed with this weapon as well. It's got a nice spread pattern and great damage at xx a shot.

Explosions are a take them or leave them sort of experience for me in most games, and this was an enjoyable toy. But in a toy-box that has so many options, why use something that you don't like? The upgrade to to the grenade launcher, despite that I've personally enjoyed the grenade launchers lob style more. This weapon shoots a straight forward rocket that propels itself until it hits it's target and explodes dealing aoe damage (that damage isn't exclusive, it even invites you to the damage party if you're too close when it explodes) Low ammo count, but definitely useful for when enemies are stacked on top of each other. One of the best damage weapons in the game, with low ammo capacity you might be finding yourself pulling this out when you need to do massive damage immediately. This weapon works by shooting out a straight arc of electricity, and frying whichever creature it's touching. It's got a rapidly depleting bar, so do pay attention to how long you blast something. My prefered style was to blast something for a bit, then pull out the super shotty and get to work! 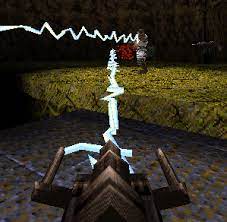 What makes a boss? - Not this

The only questionable issue with the game are the boss fights, or feeling of lack of them. They're strictly scripted encounters that didn't exactly age while in the world where we have games purely focused on boss fights.

These guys are just straight bullet sponges, and may even take a google or two just to understand how they work if you've died a couple times. Thankfully the redeeming factor is that you only have to fight three, and they're purely there just to advance the story.

You encounter the bosses in the order of Chthon, Vore, and Shub-Niggurath as the final boss.

This horror is really well designed in an aesthetic sense, the fight however is kind of strange. You can't do direct damage to him, so instead you'll need to activate an electric terminal that will discharge a zap on him. The Vore is little bastard that shoots explosive shots. This creature will eventually be encountered later one as a standard enemy. You can just blast him while avoiding his attacks. Nothing particularly fancy happens here, except that at -90 health he'll gib his own head off and it will attempt to attack you, so do watch out for that! All the previous bosses where relatively easy comparitively to this feisty mofo. When you enter his stage, you'll need to clear the way of several enemies before you can even start the fight. Once you've done that you can proceed to take his main damage attack and drive it directly into him, this took me a bit to figure out due to him bleeding when you attack him regularly. Once you've drove a few of those into him though, games over and you've wone Quake for what it's worth! Now it's time to start installing mods, and really digging into what the modern/prior players have loved playing. Running the game in a modern fashion

There are several different ways to run the game in the modern era, the most important thing is to have the ability to run it at the proper resolution & with good FPS. I've personally used this guide as it gives you different options: Steam Community :: Guide :: How I play Quake in the Current Year

If you haven't had enough

Quake can easily be said to be one of the most heavily modded games out in the market at this moment. Even today people are still building mods, something I myself even found unusual if not even a little unsettling. If you're down to play something that's decades old, has had several re-writes and is damn near as timeless as the original Doom is, you could say you just found yourself a nice treasure.